The Economics of Music Festivals

Challenge: can a girl on a budget survive three days and nights at a music festival where there are plenty of people vying for your hard-earned Benjamins on under $100?

I'm a music fan and have been to many great shows over the years but this is the first time I've ever camped overnight at a festival. I'm excited and slightly nervous about the whole experience. I am hoping it doesn't rain because I really don't want to become a Mud Person. 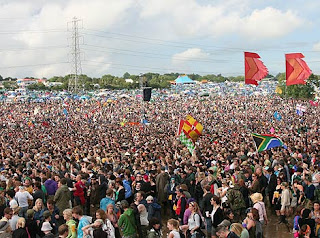 Anyhow, my budget for this event is $100, $33 of which I have spent on a t-shirt, fake Crocs, a case of Rockstar energy drink and three magazines. Seems slightly frivolous I realize but I get really really bored without Internet so magazines are pretty much essential to my survival.

Boyfriend purchased the tickets for the festival a while back at $115 a pop each. I am grateful for this fact but then again, I bought him concert tickets back in March also so it's not completely one-sided.

We are taking his car and bringing a friend. At 135 miles away, we are looking at spending $40 in gas. Split three ways that comes out to be $12 each. I also want to purchase half of the beer that we are bringing (about a case). I should budget about $15 for that.

So I hope to have about $50 to spend on food and beer the remainder of the festival with $10 budgeted for a souvenir of some sort.

I've never been to one of these events so I don't exactly know how it's gonna go down, but hopefully I stay on track!

BTW: I'm already on my way now and this will be my first scheduled post. I hope it works!

Hooray, the post worked!!!! and btw, i am SO with you on the boredom/ADD part here...anytime i go anywhere i need to bring caffeine and/or magazines with me.

I even get bored at concerts, especially if it's one band for 3 hours..i'm better at the festivals, but those all day ones KILL me. Def. fun though :) ENJOY!!!

I LOVE music festivals. Especially when you get to camp or in my case sleep in an RV. There is nothing like the vibe of people that enjoy music and are down to have a good time. I have never spent less than $500 for a 4 day music festival. But I have never gone on a budget either. I have always saved because I wanted to have the best time. Good luck. I am sure that you can do it. WILLPOWER