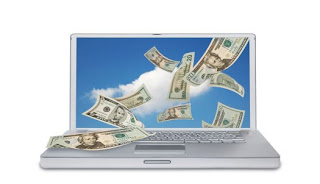 Back in May I got my shiny new laptop courtesy of a Six Month no interest financing through Best Buy and I am happy to report that with 2.5 months left to go before the offer runs out, it is nearly paid off.

I added the remaining amount ($117) to a Short Term Debt ticker on the side of my blog (better late then ever!).

Just wanted to post this update because I got mixed opinions on the wisdom of financing the computer rather than saving up the money myself. And looking back, I would do the same thing again. Yes, generally I don't think it's wise to buy something you can't afford, but I needed a way to keep up with work and keep in contact with my traveling fiance. I could have paid off the entire amount before now (and could do so now) but that would detract from my Wedding Savings goals. So why not use the 0% interest card to my advantage?
As for how I am enjoying my partially owned computer? So far so good. It's a little heavier than I would like but then again I don't trust (and cannot afford) those light-as-a-feather versions. Also I don't ever take it out of the apartment, so I'm just talking about the weight on my lap, a minor inconvenience. I dislike Windows Vista but you get used to it after a while. I'm glad to have it though as wedding planning on the internet is a fun way to spend your summer nights when the fiance is away and there's nothing on t.v.
Posted by Sallie's Niece at 3:49 PM 2 comments:

Woohoo August is almost over already and I am free of over $750 in student loan debt! Sure it may seem like a small amount when compared to the still astronomical amount I have left but I'll take it. I've created a Google spreadsheet that should hopefully make the chart more readable from now on.

At this rate I should have all of my loans paid off in 15 years. I am actually aiming to do it in ten. Thanks for reading. I can use all the encouragement I can get!
Posted by Sallie's Niece at 10:49 AM 3 comments:

$135 and My Suspended License 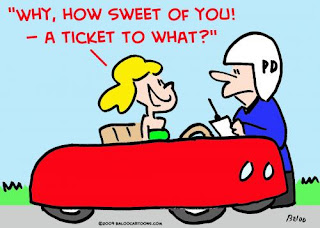 So remember how I said I was going to renew my driver's license so that I could finally get behind the wheel of our shiny new car?

Well I finally braved the lines at the DMV on the one night the office is open past 5 and got the bad news. My license was suspended for failure to appear in Traffic Court. Failure to appear? How could that happen? The answer in brief: my parents suck.
I haven't had a car of my own in years. I really didn't need one and couldn't afford to replace the car my parents gave me for law school after it died (aka the world's worst car). But once while I was home visiting my parents I borrowed their car to run and errand (for them mind you) and got pulled over and issued a ticket for having an expired registration. Mind you it was my parent's expired registration. I gave them the ticket and was assured they would "take care of it."
I guess when they said they would take care of it that meant not only would they not send in the ticket they would not notify me when a second notice was sent home (the outdated address on my driver's license). So now I can't renew my license until I pay the fine. The damage: $135.
My fiance thinks I should make them pay the fine but really I don't want to get in an argument about it. They should have paid the ticket but I should have 1) updated my address on my license when I moved out and 2) realized that the ticket was in my name (in my defense, the cop told me the ticket wouldn't go on my record if my parent's just renewed their registration).
So that is definitely a Budget Buster. I haven't sent in the money order yet but I'll get around to it. The guy at the DMV said I will probably have to come back in TWO TIMES. Awesome.
Posted by Sallie's Niece at 6:31 PM 6 comments: 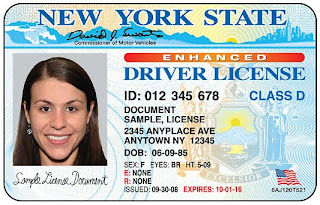 I can't believe September is almost here. It's been a fun summer but it seemed to fly by so fast. Hopefully the next 11 months will fly by soon so that we can enjoy this wedding we're saving for. Believe me, some days I just want to run down to City Hall!

Anyway, I have some spending I've been putting off and some of it can't be put off any longer, namely new contact licenses, getting my hair cut and renewing my driver's license. I could use some new clothes for work but I'm not going to buy too much stuff yet. Anyway, with that in mind, here is my budget for the next two weeks:

Today has been incredibly busy for a change so I am just getting around to my budget post now, forgive the delay. As I predicted it was hella annoying having 3 big bills to pay all during the same two week period. Plus I got a letter in the mail saying I was overdue to the utility company! FML. This was news to me as I logged into my account after I moved and terminated my service and had a $0 balance. I even updated my address just in case. Usually I would get an email telling me a bill is due so receiving an overdue letter was not expected.

My fiance had to make up some of the wedding savings this month as I was pretty close to being broke. I will probably need to move the Sallie Mae payment to a different day of the month so I will report back on how that goes. In the meantime, here is how I did with my budget:

We are still trying to figure out plans for our rehearsal dinner so I'm going to have to step up the wedding savings. I will find out the account balance and add a ticker to encourage myself.

As always, I will post a new budget very soon.

Posted by Sallie's Niece at 3:58 PM No comments:

We Bought a New (Used) Car 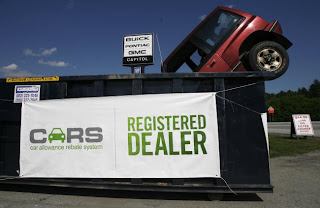 One of the most popular mantras in personal finance is to drive your car until it dies...which is what, unfortunately, ended up happening to my fiance's car. It wasn't SO unexpected. The car had stalled a few times recently and had been emitting a less than pleasant smell. Also the air conditioning has been broken the entire time I've been dating him which...well, isn't so pleasant in the humid Northeast summertime.

To add insult to injury, the insides of both driver side doors had started to give way, making it nearly impossible to open the door. Several weeks ago someone had also broken his side view mirror in a parking lot.

Yet we hoped we could make the car last a few more months, especially since we didn't use the car everyday. But as the saying goes, "you make plans and God laughs." So we hit the Internet, the newspaper and the street in search of a newer car.

I'll spare you the automotive mumbo jumbo and skip to the chase: we got a beautiful 2008 Hyundai Sonata Limited. Didn't qualify for Cash for Clunkers sadly enough. With a $500 down payment and $500 credit for our "trade in" (which was dead in the parking lot of the auto mechanic at that point) we financed the remaining $15,000 at 7.99%, a rate that's a pretty standard right now for used cars. 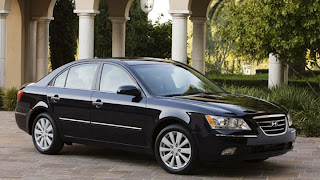 As much as it sucks to introduce a new monthly payment into our lives (my fiance hasn't had one in years and I've never had a car loan) I am a big fan of the new car. I've only been allowed to drive it around a parking lot until I get around to renewing my driver's license but it drives really well and I know it's a car we will have for a long time. What this means, however, that now more than ever, the onus for saving for the wedding is on me. And I'm up for the challenge. I see it as my way of contributing financially to our lives.
Posted by Sallie's Niece at 11:14 AM 11 comments:

I'm not too excited about this budget. I mentioned in an earlier post how I decided to automate some of my student loans so now I will be paying Aunt Sallie Mae again with this paycheck...even though I just paid her! One of my readers mentioned I could call and get them to change the date on the payment but I haven't tried that yet...and my payment is already scheduled for the 17th. Frustrating because I already have two automated payments scheduled for the 15th of the month. I mean, I'll live and everything but it's not going to be a good two weeks for the wedding fund. :-(

So here's my budget. I also have a rant about friends and money which I'll save for a new post tomorrow.

Must must get back on the brown bagging bandwagon. Also my mea culpa of the day is I managed to charge some things on my credit card lately that I didn't pay back right away and now it's time to pay the piper. It could be worse I guess...at least my credit limit is so low. :-)

So yes I will have to find a way to make up for the wedding fund savings deficit later in the month. I think I'm going to try to sell some of my old law books online.

Posted by Sallie's Niece at 7:09 PM No comments: 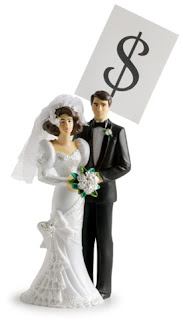 In the month of July I saved $1100 for the wedding! This is the second most amount of money I have ever saved in my life...and the fastest I've ever saved so much ever. Plus the $100 that my fiance had put in the account we now have $1200 for the wedding. I'm very excited to have saved so much....but unfortunately most months I will not be getting a check for nearly $500 in the mail.

11 months to go and according to my calculations we need to save about $900 each month if we are going to meet all of our goals. I plan to save at least $800 of my salary each month and my fiance will throw in extra money from time to time. It's only fair considering he's paying the mortgage, the electricity, and the car loan (more on that new development later).
Spendy summer continues but I'm not feeling so guilty about it. In the winter months when we're boiling chicken soup because it's too cold to go out we'll think fondly of the nights it was so beautiful we just had to take a stroll to the neighborhood tavern and sip cocktails on the sidewalk patio.