I'm back!! After an exciting three days and nights camping at a music festival over the weekend, I am so happy to be back in civilization! A great time was had to be sure, even though I 1) overspent and 2) nearly developed dysentary.

I have a lot to say about the financial implications of the weekend and lots of helpful tips to future festival-goers out there, so I've decided to divide my report into multiple posts. Also, since I've been away from the working world for an extended period of time, I am simply too busy to report on it all now. 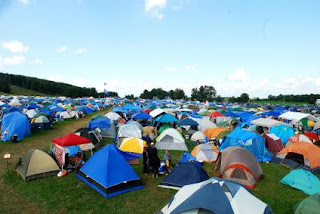 First, the numbers. I had planned on spending $100 AT the festival. Unfortunately I managed to spend nearly $70 before we even got there. This included the $30 I mentioned in the last post, plus money for beer, soda and snacks ($20), new sunglasses ($10), breakfast on the road ($5) plus a soda and candy for the car ($5). The remaining $30 was quickly absorbed within the first day and a half of the festival, mostly on beer ($4.50 a pop!).
I told myself I would take out an additional $100 to last for the entire weekend. This challenged I luckily passed! I am going to write more about how not spending money is almost a fool's errand at these types of events, but in the meantime, that's how much was spent - mostly on food, beer, and a t-shirt. It was a lot more than I expected, but I didn't really anticipate the fact that all of our food/beer consumption would be done at the concert itself and not the campgrounds where we had additional (free) food available.
Boyfriend was in his glory this weekend and he shelled out a heck of a lot more money than me, so I'm happy that we got to have this fun time together, even if it was so costly. Now we're back to the reality of working, painting, and moving (his stuff) that we luckily were able to leave behind for the long weekend.
Stay tuned for posts about how drugs are cheaper than food and how hippies have become quite commercialized since the days of Woodstock!
Posted by Sallie's Niece at 1:15 PM