Planning to Live in Sin 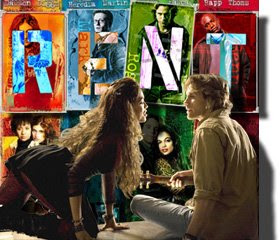 Every month I write a check out to my Very Expensive Storage Facility, aka my apartment. It's something I try to tell myself to see the "big picture" that despite the fact that I spend the majority of my nights (shocking) at Boyfriend's place, that maintaining my own apartment is neccessary. But it's hard to see the big picture sometimes when it costs you $725 a month. Plus utilities.

When Boyfriend was living in his old apartment moving in with him wasn't something I planned on. The place was way too small and on a sketchy block. We briefly considered renting an apartment together - an idea that lived until I mentioned it to my parents and they had minor heart attacks about the situation. But a few months have gone by, my parents have gotten to know Boyfriend a little better, and goddamnit I'm 28 years old....

I know that moving in with someone can be stressful. But if that's my goal I need to plan for it, right? Besides "officially" sharing his space it will save us both a couple hundred dollars a month. After talking about it with him we agreed to the following terms (compared to my current numbers):

I still may decide to pick up half of the cable and Internet but he said not to worry about it. I will rent a storage facility in order to store my bed, desk and a couple other things I won't want to part with (in case - gasp - it doesn't work out).

This plan sounds great, right? Why don't I just sign on the dotted line and get moving? Well, here are the problems:

So, alas, the move is not happening any time soon. I want to save up at least enough money to put down a deposit on a new place and first month's rent in case (gasp) the move/relationship does not work out. Based on my current savings of $0, I am about $1500 away from achieving this goal. Ironically, if I didn't have to pay rent every month, saving $1500 would be a snap. Isn't irony a bitch?

Paying off the old utilities is taking an excrutiatingly long time. But there's no interest on the Payment Agreement so it hasn't been my first priority. I hope to have it paid off by Christmas.

hee! living in sin is fantastic and economical, and the only caveat i'd share is: first talk about whether what you're paying is actually "rent" or a contribution to the mortgage. if it's the latter, you would expect to get a "refund" or buyout if you moved out. this is something to figure out now and write down. additionally, if you have any worries at all about the sharing/division of household tasks, talk them over a few months before you move in. one good thing is to make a list of all of the chores that have to be done to keep a house running pretty well, then have each of you write down which ones you don't mind or actually like doing (say, for instance, you like mowing the lawn, but can't stand going grocery shopping), claim those for yourself and split up the odious tasks. just being thoughtful about this aspect of cohabitation, whether or not you ever stick to your division of duties, will solve a lot of problems before they happen. when i did this, we also made a sub-agreement: since we knew which things were "ours" to do, we would never nag the other person about their tasks. no one had to be the "mom." :) have fun and i'm so, so in awe of your planning this far in advance as it is.

it's so fun to read your blog!

Thanks for the encouragement. I'm not sure about the "rent" versus "mortgage" part yet. His monthly maintenance fee is $390 so I wanted to at least take care of that. Perhaps the remaining $10 would go towards the mortgage? It's a good question and one that I have some time to ponder. We also discussed me buying into his equity if we ever (gasp) get married. I think that would be a fair arrangement and he didn't put much money down to begin with so it wouldn't be an astronomical number.

My bf and I are currently planning to move in together. His lease isn't up until May so it will have to wait until then. The good thing is it gives us time to plan and gives us both more time to save more money.

I think waiting until June is a wise decision to get all your ducks in a row. I agree with Idub on the division of chores.

I moved in mith my fiance now hubby and we did not have a discussion about that. It's all worked itself out but I wish we had discussed before I moved in.

I did wonder briefly what my parents would say too. I was almost 30 when I moved and we waited three years to get married. I've been with him over seven years so it's worked in our favor.

I personally love living in sin! ;) And at 28, should your parents really be judging you?? I moved in with my bf when I was 22, and 3 years later, I'm still very happy with my decision (and if my parents ever had a problem with it, they've known to keep it to themselves).

I agree with ldub, dividing up the chores in the beginning is a good idea... My bf hates cleaning, and it drives me up the wall. BUT I try to remember that he does the laundry and cooking, so it's fairly even. ;) As soon as I get out of law school, we're going to hire a maid though! lol.

yeah, even in the midst of debt repayment, we decided to spring the $65 for a once-a-month cleaning service. as he put it when i moved in, "umm, i'm a little embarassed, but i hire a cleaning service. and, since i don't take having a woman living with me to mean having a woman around to clean up after me, i'm, umm, keeping the cleaning service. so, yeah, there's my thing." something like that ;) we've never had any trouble with division of tasks, but an ex and i did, and the listing of all of them and divvying according to preference did seem to help a lot. just wished we'd done it before we moved in together, rather than as a retrospective move!

OMG we already bicker over cleaning - mostly the dishes but luckily his new place has a dishwasher!

hahahah, you are too funny girl - i love it! don't have much to add other than i, too, lived in sin, but it's really just going with your feelings and if you'll be "happy" with the decision...life is short, do your thang!

I am living in the same apartment as my boyfriend. However, it happened a bit backwards, as we were roommates before we started dating. It happens...

Anyway, I feel like it would be hard to have us living in two different places, as it would require extra travel and rent and such. So it works out pretty well. And since most of the financials were already split between roommates before we started dating, it didn't need to be dealt with. We share some expenses, like groceries and dining out, usually by trading off who pays. That does mean that there may be some unevenness in the expenses, but we've come to deal with that.
We still have separate bedrooms (since that was the arrangement when we moved in with our roommates) but I think it works out nicely, in case one of us wants to go to bed early or anything...we get our own space (which also is good for clothing storage and the like).

Anyway, as for your situation, I think one thing you can do now, if you're living with your boyfriend full time, is make sure your apartment is using as little utilities as possible...unplug unnecessary electronics, turn off the heat, cancel extras, etc. Every bit helps.

off topic but I LOVE RENT!!

My wife and I have a strange way for the division of chores, but it seems to work for us.