Where have I been? Yikes. My life has been disrupted and I will (sigh) be without home Internet access for a while. But don't worry New York State taxpayers, I will still take some time to update my blog at work.

This weekend Boyfriend moved into his new condo!!! Well his stuff did. Most of it. It was exhausting. We've been painting the new place and packing up the old place for the past two weeks. It's been confusing for me the past ten months going back and forth between Boyfriend's apartment and mine, I gotta admit, but with three different places - with three different sets of keys - it has been crazy! Where did I put my toothbrush? But luckily I think we have seen the last of Boyfriend's old apartment! Goodbye crackhead neighbors, one of whom we hired to clean the place, haha. Forty dollars buys a LOT of crack.

So how much does it cost to move? Other than the emotional toll of course and the wear and tear on my legs, back and arms? I'm not 100% on the numbers (it's Boyfriend's money after all) but here goes:

U-Haul Truck 17 feet - $50 including all the rip off fees (they say $19.99 but it's a lie)
Two Moving Men - $75 an hour each times four hours = $300 (BTW we only hired them for two hours and it just took MUCH longer than we anticipated)
Tip For Moving Men - $60 (they were pretty suprised we tipped them, do they not get tips? My Dad tips everyone so I assumed this was a tip business, correct?)
Crackhead Neighbor - $60 - $40 to clean the old place and $20 to help load the truck. Actually Boyfriend gave him more but that's for some tile work he claims he is going to do for us. He helped out a lot so even if it doesn't pan out, it's not that much of a loss. 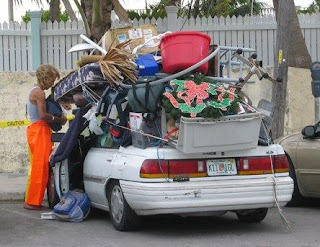 And yes, this was not a frugal move. There are plenty of ways to save money by doing it yourself but Boyfriend resolved never ever to move without movers long before I met him and I gotta say, I agree. Even with the movers, Boyfriend worked like a slave all day in the rain. I actually had the luxurious job of guarding the truck. Sure my back didn't break but I was standing outside in the rain for six hours.

The new place is awesome though! It's still full of boxes and furniture is all misplaced but by next weekend it should be liveable. AND the best part is that it's only 91 steps (I counted) for my apartment - where we've been staying since the condo is a big giant mess.

Boyfriend had to go out of town this morning but I hope to get some more unpacking done while he's away and will post pictures as soon as I can find my camera!

I feel your pain. I have moved twice in the last 2 years and have promised myself that's it for a while! It's all the sneaky little costs that you forget about that suck the hardest, besides the broken back of course! Wishing you lots of happiness in your fella's new place!!

I plan on moving in the next couple of years and I also plan onhiring movers. I HATE moving with a passion nad when I moved across the country several years ago movers helped and it was GREAT (the cost was paid by my employer so that was great too).

Glad you are getting all moved in and painted and stuff! It's so nice to have a place you can call your own.

Wow, congrats on such a successful move! I've never hired movers before but I think my next move will NOT be DIY. I'm getting too friggin' old and tired for that. ;)

I agree. Moving is horrible. Stuff gets broken and dented. People get injured. Stuff gets lost forever. Every time I move I wonder why I am hauling around all of this stuff I never use. I'm such a pack rat.