Fell Off The Frugal Wagon - A Map of My Saturday

Everyone makes mistakes and although I consider myself a smart and succesful woman, I admit I am prone to bouts of sheer stupidity at times. It happens and the only thing you can do about it is learn from your mistakes so that they don't happen again. Take this Saturday for example.

Boyfriend and I have been extremely frugal as late, to the point of only selecting free weekend activities and limiting ourselves to two grocery runs a month of less than $100 each. We have been staying in for dinner pretty much every night, switching to less expensive brand named products and generally cutting back wherever possible so that he could buy a condo soon.
But Saturday we were supposed to meet out of town friends for brunch. We went to a restaurant and waited. And waited. At the bar. Eventually we decided we may as well have a drink as we waited. Wouldn't you know that Bloody Mary's were 2-for-1 on Saturday? Well I am not a liquor drinker by any means. In my younger days I could throw them back but now...2 Bloody Marys and a beer later and I was pretty far gone - only it didn't seem like that since it was 1:30 p.m. on a Saturday afternoon!
After we ate I decided I was going through with my plan to go into the office for a couple of hours to get additional work done. No big deal - no one is ever around on a Saturday - and the office is only a couple of blocks away. But here's where it all went wrong - on the way to the office with the taste of vodka and horse radish in my mouth, I decided I absolutely NEEDED a cigarette right then and there. On my way down the street I KNEW it was wrong but I didn't care.
Sure enough I get to the neighborhood bodega and the following events take place:
1) I ask for a pack of cigarettes and the man behind the counter says "But you quit!" [Opportunity one to back out of this bad decision.]
2) I insist of buying the pack anyway and then realize they will not accept my debit card unless my purchase exceeds $10. [Opportunity two to back out of this bad decision.]
3) Undeterred I go to the corner of the bodega and use the shady ATM when my own back ATM is just around the corner!! [Just really really dumb.] 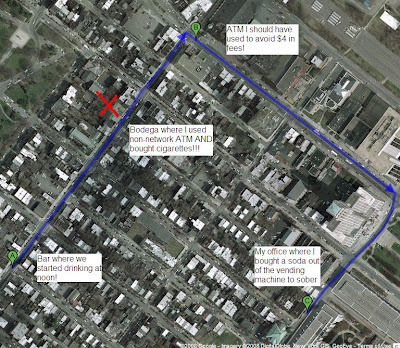 I made this map so you can follow my train of thought (or lack thereof) throughout my fall from grace.
I then walk to work and furiously smoke a cigarette for the first time in almost two weeks. It didn't even taste good (did it ever?) but I had missed it so much. I get to the office and am now disgusted by the taste of Bloody Mary and cigarettes and decide to purchase a vending machine soda ($1.25) - something I swore off of months ago - to help get myself back together.
I proceed to work for a couple of hours, walk to Boyfriend's apartment where I quicky brushed my teeth and changed my clothes. Too late! He smells the smoke immediately and makes me throw away the offending pack.
And how much money did I waste? Well here are the numbers:
$6.75 - pack of cigarettes
$2.00 - Shady ATM fee
$2.00 - fee my bank will charge me for using Shady ATM
$1.25 - Soda to get rid of gross cigarette aftertaste
_______
$12.00 = total Stupidity
I really have officially quit smoking though. Saturday just reinforced that for me as I got absolutely no pleasure out of my cheating and am still ashamed to think (write) about it now. It was an expensive lesson to learn.
The non-network ATM issue is one I've been grappling with for a while and I'm also mad at myself for being so lazy/impulsive/drunk to use another ATM when a free one was available nearby. I guess I just didn't want to feel stupid at the store but I sure feel stupid now.

I think this is the longest I've gone without reading a new post from you--so I was worried actually that something happened! I LOVE this post, not for your actions of course, but for your honesty and willingness to keep going. We all stumble. And personally I find that drink is often the thing fueling my bad choices! I too had a smoke on Friday night, first in ages. Keep going!!

Thanks for the encouragement! Life has been pretty hectic and quitting smoking took away some of my patience and focus for a while but I think I'm back on track now.

At least there was the voice of reason screaming at you the entire time. I don't think you fell too far off the wagon. Just pick yourself back up and get back at it. I'm glad your BF made you throw away the pack of smokes. Remember if it were easy it wouldn't be worth doing.

Ya live and learn, definitely. Don't feel too bad about it all, at least you learned your lesson! There are many, many more expensive lessons out there. Just remember one day won't make or break you, it's the overall behavior patterns that count.

LOL. Usually when I start kicking back the Bloody Mary's at brunch, I go home and pass out. If I went near a store, I would probably spend WAY too much money -- that whole impaired judgment thing.

At least you didn't do too much damage and you realized that smoking's kind of gross? ;)

This post is so cute..I mean outting the map together, thinking about all the things. You are a different person now.

Thanks everyone for reassuring me that my diversion wasn't SO bad. I think I'm generally just frustrated that I set goals for myself and then deliberately broke them. I'm going to try harder.

I think it's not a huge deal, but smoking is awful. I can relate having smoked in college and still crazy it honestly when drinking. BUT it's a bad habit more than money.

i love the way you wrote this post too! Quitting smoking is hard. especially if you have smoked for a while. I was so amazed you had made it this far without a setback.
Start thinking about ATM fees as charges to get your own money. Why should you pay a fee for something you have worked for?
I think I have paid those maybe once. I walk/drive miles and miles to get the right one.
I know there is a bank that refunds all ATM fees but I don't remember which. maybe you should look into that