Present Idea: Get A Clear Head For $15

I recently celebrated my one year Anniversary of my first date with Boyfriend. It was a very special time for us and included going to my first professional football game, getting a dozen pink roses, a fancy dinner, fake Uggs, and a new dress! I'm a very spoiled girlfriend. As for Boyfriend, so far he has just gotten a card, kisses and an I.O.U. for a present. I had picked one out present tentatively but I decided I would have to show it to him first. As a rule we generally tell each other exactly what we want for presents - that way we don't waste money on something the other doesn't really want.

Boyfriend decided he wanted a wall mounted bottle opener as his anniversary gift. Very practical and necessary as we are forever losing our real bottle opener. Also we have yet to paint/decorate the kitchen in the new condo. Instead of just getting a plain boring one I picked out this lion's head from Pottery Barn - for $12. 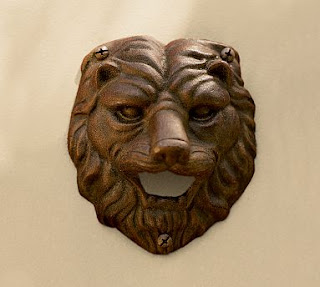 I think it's pretty awesome but then again it's Boyfriend's kitchen (for now!) and I am loathe to make a design decision without his approval. Also we still haven't picked out a paint color though we are leaning towards the red family. Old Sallie's Niece would have just said "hey it's only twelve bucks, just buy it" and then decide but luckily I have restrained myself.
In the meanwhile I have become very fixated on decorating the condo. Boyfriend got to have all his fun with renovations and now it's time for some finishing touches. I want to get him some accent pieces - especially for the bedroom which has absolutely no decoration as of now. Look for some posts on DIY decoration soon as I've become one of those boring nesting types now.
In my online bargain hunting I did find the coolest thing and I can't decide if our decor would allow it but I wanted to share it nevertheless. It's a head made of recycled glass, awesome! And available at Pier One Imports for $15. I think it would look pretty cool in an office. Who doesn't need to clear their head sometimes? 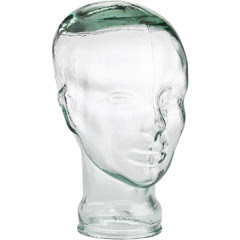 What do you think of my design ideas - tacky or trendy?
Posted by Sallie's Niece at 10:31 AM

I have always believed that less is more. You can apply this concept to just about anything. From decorating to cooking, people try to out think or trend each other. A glass head is about as interesting as bizarre artwork. I think the cleaner a room is the better. If you add too much stuff it starts to look cluttered.

My kitchen is red which I love and we have a bottle opener on the wall cause we also lose our bottle openers all the time. The bottle opener is brushed nickle to go with the drawer pulls and lighting fixture we have in there.

What a great idea for a gift. In fact, our bottle opener was a gift too. :)

I love the "clear head". I think it is a great inexpensive conversation piece.

I love the bottle opener on the wall. I used to have one in my old apartment.

I love the lion, the head is another question...

LOL, I'm so happy you like it! Thanks for reading honey!

I have a good (cheap!) decorating idea if you're interested! I was trying to decorate my bedroom and have it look cool/interesting without having to buy a lot of items. I ended up buying these curtains http://www.target.com/Waverly-Damask-Window-Panel-Black/dp/B000NKFBII (however, they were on sale when I got them) and hanging them on the wall behind my bed. I mounted a drape rod up by the ceiling and hung the curtains together, spread out (no wall showing - it looks like one big panel) - it ended up looking so cool - like a huge, expensive headboard.

wow. mounted bottle openers. I had never heard about them. that's pretty cool though.