Figuring out this budget was harder than usual as the Extra Paycheck meant I have already paid all of the bills that come at the end of the month and I'll get paid again before the litany of bills that are due on/around the 15th are due. But I guess that's a good problem to have.

I decided to pay my two smaller student loans again even though they're not due for several weeks. That way I have two less bills to pay with the next paycheck. I am also shopping for a present for my little sister's 17th birthday. I like buying her gifts because she's such a great kid.

So here's where money will be going for the next two weeks when I swear I really will pay the old ticket (fourth times a charm?). 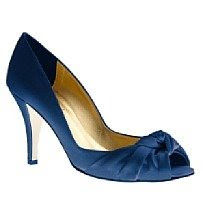 Some of the money out of miscellaneous I may use to mail out the Save the Dates for our wedding.

Hey, speaking of weddings, Stacking Pennies and I are both thinking about wearing blue shoes under our dress. (Granted I haven't even looked at dresses yet but that's a whole other story.) What do you think?
Posted by Sallie's Niece at 3:02 PM

I saw the Sex and the City movie recently, and that was the first thing that came to mind when I saw SP mention colorful shoes. I thought they were GORGEOUS shoes....just don't buy the same pair, please. lol.

As long as you find the right pair I say go for it!

I think blue shoes would be awesome! I wore white but I did have mine dyed later on to chocolate brown. Yum!

blue shoes - fun! i'm thinking yellow cropped jacket over my dress... so i'm all for color ;)