So as much as I was annoyed about Online Banking last week, I'm begining to really like it. It can create pie charts!! That really gives me a handle on what I'm spending money on. Some readers have expressed concerns that I didn't allocate enough money for food and other expenses but it's true, the proof is in the (pudding) pie chart: 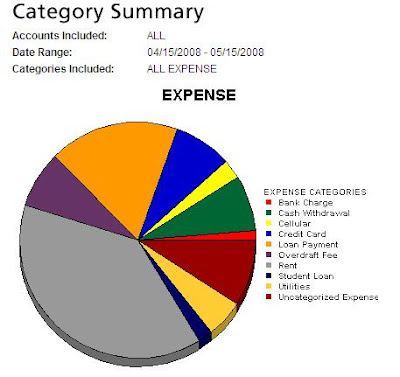 So that's where my money has gone for the past month. Rent appears a little higher this month due to a reason that's too long to get into, but I was pleasantly suprised to see I only took out a small amount of cash this month. The most annoying revelation is how much money I spent on Payday loans but I have vowed to avoid them at all costs from now on.

The overdraft fees are also a thorn in my side. Today I called and got a $28 refund from the overdraft I wrote about before. Not the same as getting all $38 back but it made me feel slightly better.

I have been too busy at work today to even eat lunch (again) but luckily I have some leftover chinese food waiting for me soon!