So last night my friend took me to drop off six bags of clothing at Goodwill that I pulled out of my closets. No, none of them were quite nice enough to sell to a consignment shop (they're pretty picky where I live). And yes, I did get a receipt.

I felt really good about getting rid of stuff as I have way too many clothes in my closet that I don't wear and also because getting my apartment in order is one of my current missions.

A major problem I've been having lately is there is not a lot of closet space and I just junked an old dresser that I had and most of my clothes are all stacked in piles on the floor. Pretty much everything in my apartment has been donated to me by friends or family. I've been looking high and low for a dresser to replace the one I had to throw out but alas the weather hasn't been warm enough for too many garage sales and the ones on Craig's List were too pricey.

When we got home I ran into my neighbor who just happened to be moving out. He said he was getting rid of stuff. Sweet, I think! After snagging some free picture frames, he asked me if I was interested in buying his coffee table and/or his small bedroom t.v.

It just so happens that I have never actually had a coffee table. I have a little table that I use as a coffee table but it's a bone of contention for me because it's not big enough for guests on either couch to access. It is small and has a chessboard on it so I mostly use it as a gaming table. I've wanted a coffee table for literally four years since I've moved in and have alternated between using one of those big tupperware containers, the chess table, and a pretty much broken end table and they have all been insufficient. My neighbor's coffee table is awesome!

It also happens that approximately one year ago I broke my bedroom t.v., one that I've had for eight years so it's not too sad but I like to lay in bed and watch a movie. Even though it's small they cost almost $200 to replace.

So long story short, I end up agreeing to buy both the t.v. AND the coffee table from my neighbor. I'm really not an impluse buyer and was already feeling sort of remorseful on my way to the ATM to get the money. Yes, I told myself, I have just enough money to cover this, BUT it's going to make the next 8 days difficult. But then again, getting my apartment in shape is pretty important to me as I've decided to renew the lease and since it's difficult to do any furniture/appliance shopping on my own, this seemed like a great deal.

AND THEN on the way back from the ATM, I got a message from above. A lovely discarded dresser only a block from my apartment. It is EXACTLY what I have been looking for for weeks! I lugged it inside all by myself and set it up in my room! 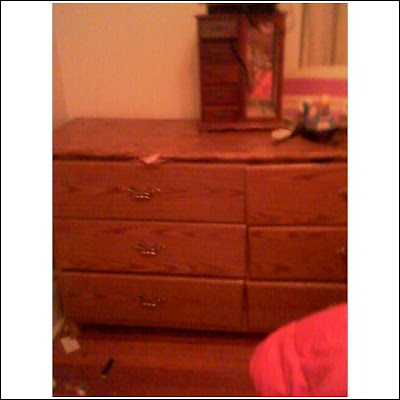 I was so excited that I stayed up half the night cleaning and sprucing up my apartment. So, I still feel a little guilty about spending the hundred dollars, I did make out pretty well all told last night. I think I'm going to relist some of my stuff on Craig's List to see if I can break even this week.
Posted by Sallie's Niece at 1:17 PM